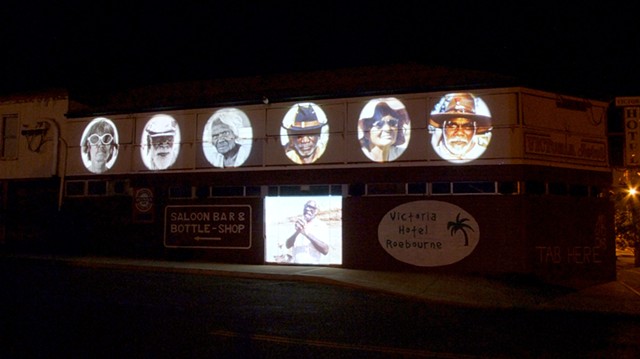 Approximately 180 people from Roebourne and Karratha attended the screening. The majority were Yindjibarndi people with the inclusion of councillors, teachers, local health and legal workers. The audience watched and listened in remarkable silence as the building lit up and sung its sad song. But more than sadness, the song is complex, with the pub as a site of delirium and wild nights of all manner of mixed emotion. Many of the Yinjibarndi and Ngarluma people have expertise listening to what the country has to say - Birndi Wirndi/ Worlds Apart was the pub singing. The response to this was clearly emotional and there has since been talk of a re-screening or a yearly event. In logistical terms, the fact of expanding the documentary format to a specific outdoor architectural site provided an easily accessible, free, open, public and social space for the local inhabitants to gather together.

For the Pilbara it was a radical re-imagining, re-presentation and foremost, acknowledgement of a complex history. At one moment within the piece, the visual effect of a shimmering cascade of beer, blood and semen gushes down the walls of the Victoria Hotel. In Roebourne this has been an inseparable threesome haunting the pub, tied to consumption, violence and sexuality. Both Woodley and his partner Lorraine are children of this conjunction, in a repeated scenario their fathers were unknown white labourers who rolled into the pub, rolled out and looked for action without responsibility for consequences. Further on in the piece the liquid morphs into vignetted spectres, whose mirrored forms oscillate to the song %Mirurru Yarnamarna Tharurruhangi% and gradually take shape from spirit-like entities to delineate the faces of elders; Toby Malcolm, Wimiya King, Yali King, Long Mack, Mable Albert and Old Wally. These portraits linger as powerful reminders of a people, who despite the numbing and dumbing intoxication of beer, the brute reality of violence and the callousness of semen, still stand strong in the present as much as the past.